Mythbusting#1: Cell-free systems are only relevant for membrane proteins

Mythbusting#1: Cell-free systems are only relevant for membrane proteins 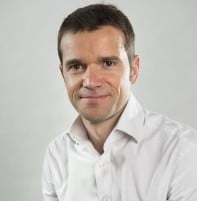 Cell-free protein synthesis (CFPS) methodology offers the possibility to produce proteins that would be difficult or even impossible to synthesize in cell-based systems. These so-called “difficult-to-express proteins” include membrane proteins, but also cytotoxic proteins (toxic cancer therapeutics, antimicrobial peptides/proteins and toxins), vaccines, antibodies and proteins containing non-standard amino acids [1]. Cell-free systems are, also, advantageous for the synthesis of proteins with biased coding sequences or with defined post-translational modifications, for the ones that require chaperones or specific chemical environments and even for the synthesis of virus-like particles and bacteriophages.

The limitations of the cell-based systems

Difficulties in the production of difficult-to-express proteins in cell-based systems can be due to poor growth of the hosting cell, inclusion body formation, protein inactivity and low production yield [2]. Although some improvements have been made in cell-based systems to increase production yields, namely optimization of nutrient conditions, temperature decrease, co-expression of chaperones and the use of engineered host strains and expression vectors [2], a fundamental limitation persists, which is the inhibition of toxic protein production or inactivation of its toxicity by the host cells, as a defence mechanism [3]. Additionally, the synthesis of membrane proteins frequently affects the central metabolism of the cells and blocks cell growth [4,5]. Furthermore, cell-based systems using microorganisms fail in providing correct post-translational modifications such as glycosylation, which impairs antibody activity and, in this case, the use of mammalian cells is a valid alternative but the antibody production process is time-consuming and expensive [6]. 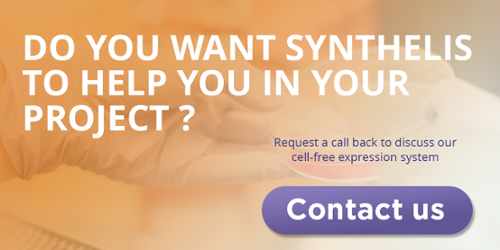 In CFPS methodology, the transcriptional/translational machineries from crude cell extracts obtained from bacterial, plant or mammalian cells, or the reconstituted purified transcriptional/translational components are employed [7,8], mimicking the cytoplasmic environment [9]. Therefore, all the required elements are mixed together with the extract, and the in vitro transcription and translational reactions occur simultaneously. The openness of the CFPS systems allows for environmental control and freedom of design in order to optimize protein production, surpassing some of limitations observed in cell-based systems in the synthesis of difficult-to-express proteins [10]. First, CFPS systems are not dependent on cell viability, so they are invulnerable to the cytotoxic nature of proteins. Second, the production of proteins with post-translational modifications by site-specific non-standard amino acid incorporation can be achieved in CFPS [11]. Third, the synthesis of membrane-anchored proteins can be performed in CFPS systems by using membrane mimicking structures, such as liposomes and nanodiscs [12]. Fourth, protein disulfide isomerase can be added or expressed in the reaction mixture to enable disulfide bond formation, which is important for protein folding [13]. Some examples of CFPS applications in the production of difficult-to-express proteins or proteins involved in self-assembly processes are herein described.

CFPS for proteins that are toxic to the production host

In the synthesis of proteins that are toxic to the production host, CFPS systems clearly show advantages over cell-based systems, allowing to perform several improvements that increase productivity and bioactivity of the resulting proteins. The cell-based production of onconase, a promising anti-cancer drug that acts by degrading tRNAs and other RNA molecules [14], faces some problems when using microorganisms, related to inclusion body formation, purification and refolding, exhibiting a low production yield [15]. On the contrary, when CFPS is used, an active form of onconase can be obtained with a high production yield. To surpass the tRNA degradation problem, additional purified tRNAs can be supplied to the CFPS mixture during the reaction [16]. Pierisin-1, a cytotoxic therapeutic protein that induces apoptosis of eukaryotic cells, cannot be expressed in E. coli due to its high toxicity. In contrast, when using CFPS with insect lysates, pierisin-1b could be synthesized with high yield [17], being active in HeLa carcinoma cells. Finally, Pseudomonas exotoxin, secreted by Pseudomonas aeruginosa, acts by halting protein synthesis, resulting in cell death [18], and its activity against various cancers has been tested. By using a cell-free system, Pseudomonas exotoxin has been effectively produced, exhibiting high cytotoxicity in a breast cancer cell line (4T1) [19].

Antimicrobial proteins and peptides have diverse mechanisms of action, but all of them result in bacterial death or growth inhibition, which impairs their production in cell-based systems. The CFPS approach can solve this problem, by enabling the synthesis of novel antimicrobial peptides and proteins with high yields, taking advantage of the flexible optimization capability of these systems. For example, the peptide cecropin P1 was produced in a continuous exchange cell-free system, using a E. coli lysate [20]. Also, human beta-defensin-2 (hBD2), a cysteine-rich cationic antimicrobial peptide, was advantageously produced in a CFPS system, by synthesizing a fusion form carrying a Trx-tag. The cell-free synthesized fusion protein presented improved solubility when compared to the cell-based fusion protein [21,22]. CFPS methodology is also able to produce large antimicrobial proteins with high yields despite their cytotoxicity, such as colicin E1, a protein which has been used to eradicate non-growing antibiotic-tolerant bacteria [23]. E. coli colicin M, which is cytotoxic and highly insoluble, was produced with high yields in a CFPS system, by overexpressing chaperones in the extract production strain before lysis [24]. CFPS systems have also demonstrated their usefulness in screening for biologically active antimicrobial peptides [25] and to study the functions of toxins that are poorly secreted in cell-based systems but can be synthesized with high yields in CFPS systems [26].

When a protein is synthesized outside its original host, the codon usage in the foreign DNA coding is different from the expression host, which can impair protein production [2]. Hence, either codon optimization or rare codon tRNA addition is necessary to favour the recombinant protein production. Both strategies can be applied to in vivo and in vitro protein synthesis, but they are easier to perform in cell-free systems, due to its open nature. Furthermore, as CFPS uses diverse crude cell extracts from different organisms, it is easier to choose an extract that is closely related to the original host, to address the biased coding sequences [1]. Advantages of using a CFPS for this particular application are demonstrated in vaccine development, namely in malaria vaccine discovery, in the expression of recombinant malaria proteins, by supplementing rare tRNAs into the cell-free reaction [27] or by choosing different extracts (wheat germ) [28]. Furthermore, the use of rare codons at the N-terminal is a strategy that can be applied to enhance heterologous gene expression and it is easier to perform in CFPS systems, where tRNAs can be supplemented as needed to optimize protein expression [29].

Antibodies and membrane proteins are well-known examples of proteins that require chaperones or specific chemical environments to form active proteins. In the case of antibodies, the presence of chaperones can enhance their solubility and the production yield [30]. In CFPS systems, supplying chaperones to the reaction medium can be easily carried out. Furthermore, adjustment in the redox potential with the ratio of reduced and oxidized glutathione and enhancement of disulfide bond formation via protein disulfide isomerase in the cell-free reaction have enabled the production of active single chain antibody fragments [31], antigen binding fragments [32] and full-size antibodies [33]. Finally, antibodies can be fused to other proteins or drugs to acquire synergistic functions [34] and, although active fusion proteins can be produced by cell-based and cell-free systems, the cell-free approach is faster, achieves higher yields and is more flexible, being more attractive for the synthesis of personalized vaccines [1].

In the case of membrane proteins, biological membranes or their mimics must be present to allow their functionality [35]. When using cell-based systems, several difficulties arise, related to insufficient membrane insertion, cytotoxicity, aggregation and loss of function [35,36]. On the contrary, the use of CFPS systems provides flexibility in supplementing membrane mimics, such as micelle-forming detergents, liposomes and nanodiscs [7,36].

Incorporation of non-standard amino acids (NSAA) is performed during translation to provide new structures, properties and functionalities to proteins [37]. The CFPS approach further increases the accuracy and efficiency of NSAA incorporation due to its open nature, allowing the control of the components that are removed or added to the reaction mixture, such as the removal of release factor 1 from cell extract [38], elimination of negative effectors in extract via genome engineering [39], removal or cognate tRNA [40] and addition of NSAA-pre-charged tRNAs using a reconstituted cell-free translation system [41].

The synthesis of glycosylated proteins is difficult to perform in cell-based systems, particularly in eukaryotic cells, since glycosylation pathways are required for cell viability and, thus, the glycoengineering in these systems is limited to adjustments of native pathways. On the contrary, cell-free systems allow to introduce diverse glycosylation pathways (human, bacterial or synthetic) [42,43], by supplying glycosyltransferases and sugar donors to the reaction mixture or overexpressing the oligosaccharyltransferases and lipid-linked oligosaccharide sugar donors in the extract-producing bacteria before lysis so that they are present in the cell-free mixture without requiring purification. Both strategies have been effectively implemented in cell-free systems but would be very difficult to implement in cell-based systems [44]. Protein phosphorylation is also difficult to control in cell-based systems, where it depends on the expression of complex specific kinases. Cell-free systems incorporate phosphorylated amino acids directly into proteins using NSAAs, allowing to produce phosphorylated proteins with yields higher than the ones obtained with cell-based systems [11].

Synthesis of virus-like particles and bacteriophages

CFPS has also the ability to express DNAs with genomes composed of tens of genes encoding for self-assembly processes, such as virus-like particles (VLPs), which can be used as antigen scaffolds for vaccines, among other applications [45], infectious bacteriophages for phage therapy, and phage parts to be used as new materials [46]. The CFPS of VLPs has advantages over cell-based systems [47] since it facilitates the rapid screening of protein variants that self-assemble into VLPs. Due to its open environment, CFPS enables a better control of the reaction conditions, namely the pH and the redox state for the formation of disulfide bonds, which is a critical aspect in VLP synthesis, affecting its stability [48]. Additionally, in cell-free systems, VLPs are purified in a single step, significantly reducing the cost of production [46] and the production time [49,50]. CFPS has allowed several improvements in VLP synthesis, such as surface functionalization of VLPs by direct conjugation using azide-alkyne click chemistry [51], expansion in VLP bioactivity [52], and reduction of VLP intrinsic immunogenicity and increase in VLP solubility and assembly [47]. The synthesis of infectious phages by CFPS is preferable to cell-based systems because it avoids the use of dangerous pathogens, increases the range of phages that can be synthesized, can accelerate phage characterization and engineering, reduces the cost of phage production and limits the emergence of host resistance, observed during large-scale amplification and manufacturing of phages [53,54].

The previous examples clearly demonstrate the benefits and advantages of cell-free systems in the synthesis of “difficult-to-express” proteins, showing that cell-free systems are relevant to a great diversity of proteins and not only for membrane proteins.